atbswp: Automate The Boring Stuff With Python (yes like the book) is a multi platform, open source clone of tinytask, and for those who don’t know it, the core feature of the software is to allow the users to record their mouse and keyboard actions and reproduce them identically as many times as they want. 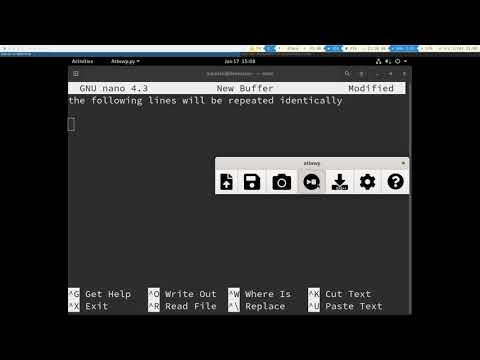 The rest of this post discusses what atbswp is, why it was built, and miscellaneous things related to the project.

atbswp is the result of frustration with tinytask which is not available natively on Unix like systems. With tinytask being discontinued now, the position shifted from multiplatform, FOSS clone, to only alternative. The most important thing about atbswp is avoiding feature creep, the software is pretty simple as it and we want to keep it that way.

Many features of tinytask are already present in the current pre-alpha version of atbswp, the one that have not been yet replicated are compile to an executable for the host platform and set a replay speed, which are on the roadmap and will be the main focus for the next development. Behind the scenes, atbswp uses a Python file so the power users can always modify it to their taste.

atbswp is pretty usable as it is. Although this is a pre-alpha release, it’s stable enough to be used daily, I use it to automate various task and almost all of my demos.

If you want up to date news about atbswp, follow me on Mastodon to be notified about releases and blog posts like this, or you can join the community on Telegram, atbswp’s source code is available on Github, you can try it now.